“It is a pleasure to announce the promotion of Matt and welcome Jim, Craig and Nate to our commercial lending team,” said ChoiceOne Bank President Michael J. Burke, Jr. “Now that we expanded our footprint across Michigan, it’s important to broaden our levels of service and expertise to fulfil our mission to provide superior service, quality advice and show our utmost respect to everyone we meet. These lending experts are key to helping us grow our community bank franchise and accomplish our vision to be the best bank in Michigan.” 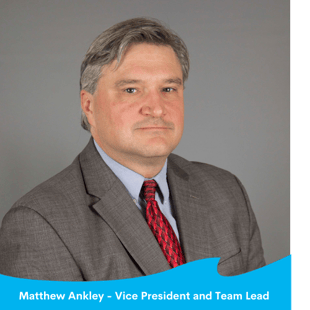 In his new position, Ankley is responsible for leading a team of bankers who provide lending and treasury management services to clients in the Eastern market of Choice One Bank.

A graduate of the University of Michigan, Ankley has a Master of Business Administration in Finance. He received his Bachelor of Science in Accounting from Oakland University. Ankley is active in the Lapeer Economic Club and his local church. He and his family reside in Lake Orion.

With 24 years of banking experience, Carney was most recently Community President, Relationship Manager with TCF Bank in Flint. Moving through the ranks at TCF since 2010, Carney also spent eight years at Bank of America, in Flint, as Vice President, Client Manager. Prior to that he was at Citizens Bank, in Flint and spent the first year of his banking career at Michigan National Bank in Farmington Hills.

Carney has a Master of Business Administration from the University of Michigan. He received his Bachelor of Arts in Economics Management and Speech Communication from Albion College. He is also a graduate of the Commercial Lending School through Risk Management Assessment. Carney and his family reside in Grand Blanc.

Oosterhouse has 25 years of banking experience. His most recent position was Vice President, Middle Market Commercial Lender with TCF Bank in Holland.

Oosterhouse is on the Zeeland Christian School Board, on the loan committee for the Economic Development Foundation and also enjoys coaching youth baseball. Graduating from Calvin University, in Grand Rapids, Oosterhouse has a Bachelor of Science in Accountancy. Oosterhouse and his family reside in Zeeland.

VanderWoude sits on the board of directors and is treasurer for Alive Ministries and sits on the Golf Outing Committee for Mel Trotter Ministries. Graduating from Trinity Christian College, in Palos Heights, Illinois, VanderWoude has a Bachelor of Science in Business Finance. He and his family reside in Grand Rapids.